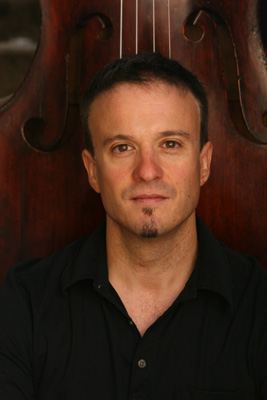 GGP’s double bass teacher, Michel Taddei, received his AB in History at Columbia University, where he was a John Jay National Scholar. Mr. Taddei has done graduate work in history at UC Berkeley and has a diploma from the Juilliard School’s Pre-College division. While at Berkeley, Mr. Taddei was invited to become solo bass of the Lyon Opera (France). Since his return to the U.S., his career has included tours as principal bass with the New York City Opera Company, chamber performances with the San Francisco Contemporary Music Players, Earplay, the New Century Chamber Orchestra, and the Left Coast Chamber Ensemble. He has also done film score recordings at Skywalker Ranch and is principal bass of the Berkeley Symphony, San Francisco Chamber Orchestra, and Mendocino Music Festival.

Mr. Taddei is Administrative Director of Music at the Crowden School, and he is on the faculty of the Palo Alto Chamber Orchestra’s chamber music workshop. He has toured with Yo Yo Ma and the Silk Road Ensemble in the U.S. and Central Asia, and will rejoin them at a concert this season at the Hollywood Bowl. An accomplished singer, he has performed the roles of Bénédict, Candide and Pedrillo, among others. Mr. Taddei has played on over forty recordings on labels including Decca, EMI, and Erato.