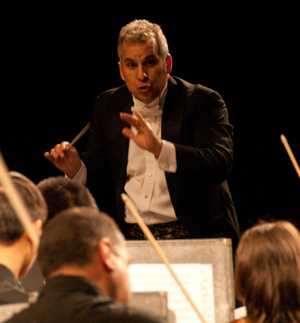 Native San Franciscan and sixth generation Californian Geoffrey Gallegos was appointed Music Director and Conductor of Golden Gate Philharmonic in 2001, and Artistic Director and Principal Conductor in 2018. During his tenure, GGP has enjoyed exponential artistic, educational and organizational growth. Maestro Gallegos’ deep commitment to arts education has extended beyond his responsibilities with GGP, including 10 years as Artist in Residence at the SF Ruth Asawa School of the Arts, Director of Instrumental Music and the prestigious Menuhin/Dowling instrumental music program and Competition for Young Musicians at the Nueva School in Hillsborough from 2007 – 2010, and as Guest Conductor of Orchestras at Cazadero Music Camp, the Peninsula Symphony Youth Orchestra, and as Conductor of the San Francisco State University Wind Ensemble in 2001. He has been invited numerous times as a guest conductor of the SFUSD All-City Festival Orchestra, and was invited to participate as a jury member for the 2014 annual Parade of Orchestras Festival held in Honolulu.

Maestro Gallegos studied at the San Francisco Conservatory of Music Preparatory School and San Francisco State University, completing, with honors, a Bachelor of Music degree in Instrumental Education and Conducting.  Advanced studies in orchestral and operatic conducting continued at the University of Iowa School of Music, where he received a Master of Arts degree with High Distinction and served as Conductor of the University Chamber Orchestra.  Four times he was awarded fellowships, chosen from a large international pool of applicants, to the prestigious Conductors Institute held at West Virginia University and the University of South Carolina. Since 2005, he has been a member of the Board of Directors of the Community Music Center in San Francisco where he began his music studies with the trumpet at the age of nine.  He currently resides in San Francisco with his wife Julie.