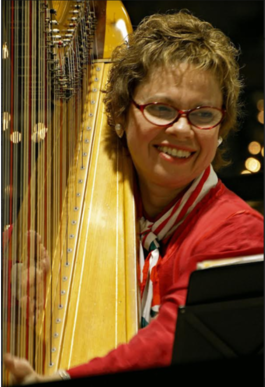 Janice  Ortega has a passion for the harp and enjoys playing a wide variety of repertoire from Bach to Rock! Besides performing harp, with over 30 years of performance experience she is very committed to teaching others in the performance of this jewel of an instrument. She has teaching studios in San Francisco, the Peninsula and the East Bay, with students ranging in age from pre-school children to adults in their 90’s.

Graduating Magna Cum Laude, Bachelor of Arts in Music from California State University East Bay, Ms. Ortega was often featured as soloist in the Music Department chamber and orchestral concerts. The Royal Conservatory of the Netherlands was home to her graduate studies in harp performance where she received the Artist Diploma, and she subsequently earned the Master of Music degree in Harp Performance with a Pedagogy Minor from Indiana University-Bloomington. Her teachers include Juilliard Professor Nancy Allen, Principal Harpist of the New York Philharmonic, Phia Berghout, Principal Harpist with the Royal Concertgebouw Orchestra in Amsterdam, and Susann McDonald, Professor Emeritus at Indiana University-Bloomington and former Chair of the Harp Department at the Juilliard School of Music.

In high demand as a performer, Ms. Ortega has performed as Principal Harp with the Liege (Belgium) Orkestra Philharmonique, Limburg (Holland) Symphony Orchestra, Gianville Symphony in Milan, Van Karajan Orchestra (Berlin), Tanglewood Music Festival Orchestra, Aspen Music Festival Orchestra and as second harpist with the Royal Concertgebouw Orchestra in Amsterdam.  In the Bay Area, Ms. Ortega began her harp performance career with the Oakland Youth Orchestra at an early age, and to date her credits include the symphony orchestras of Berkeley, Oakland and San Jose, the San Francisco Opera, the Peninsula and San Jose Civic Light Operas and Skywalker Ranch Recording Studios, where her recorded harp music can be heard in recent Disney movies.