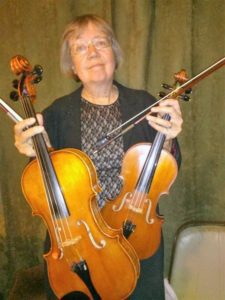 Valerie Tisdel began the violin in the fourth grade in public school in Modesto, CA. She studied violin with Daniel Kobialka at SF State University, where she was a member of the Morrison Scholarship Quartet. Tom Heimburg introduced her to the viola at San Francisco State and she has been torn between them ever since. Valerie then got her Master of Music at Manhattan School of Music, studying with Rafael Bronstein. She also studied Early Music with Lucy Cross and was coached in chamber music by Arianna Bronne.

After her schooling, Valerie played for three years in Honolulu Symphony, starting on viola and moving to the violin section. While there, she was concertmaster of the Hawaii Chamber Orchestra and taught extensively at The Punahou School. Coming back to the Bay Area, Valerie played two seasons with San Francisco Ballet Orchestra, then taught beginning strings in the San Mateo Public School system. As her career as an orchestral musician expanded, a full-time day job became impossible and she settled into her current lifestyle of freelancing and teaching on the side. She has been coaching at GGP since her children came up through the ranks, Leota on violin/viola and Joe on cello.