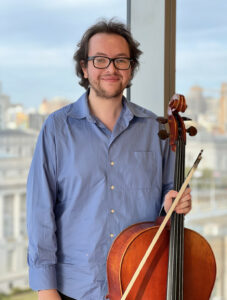 Federico Strand Ramirez began his cello studies at his public middle school at the age of 11. He began regular private instruction at the age of 14 with Louella Hasbun while also playing in the GGP. During his high school years, Federico attended chamber music programs at The Crowden School during the summer and was a member of the San Francisco Symphony Youth Orchestra (SFSYO) throughout the end of his pre-college days. He went on to receive his Bachelor of Music degree at the San Francisco Conservatory of Music (SFCM), and his Master of Music degree at the Mannes School of Music in New York City. Federico is currently in his last semester as an Advanced Certificate candidate at SFCM.

He has attended many festivals, including the Bowdoin International Music Festival, Yellow Barn Young Artists Program, Festival Napa Valley’s Blackburn Music Academy, National Orchestral Institute, and the International Cello Institute. In the United States, he has performed in concert halls such as Davies Symphony Hall, the Yerba Buena Center for the Arts, SFJAZZ’s Miner Auditorium, Lincoln Center’s Alice Tully Hall, The DiMenna Center, House of the Redeemer, and the Bohemian National Hall. In Europe, Federico has performed at halls such as the Berlin Philharmonie, Amsterdam Concertgebouw, and Prague’s Smetana Hall. He has been featured on German National television from a performance with the SFSYO at the Ingolstadt Festival Auditorium, a radio broadcast of Mason Bates’ symphonic work “Garages of the Valley” on Classical KDFC, and on the Guggenheim Museum’s “Works and Processes” series for Lisa Bielawa’s work “Broadcast From Home”.