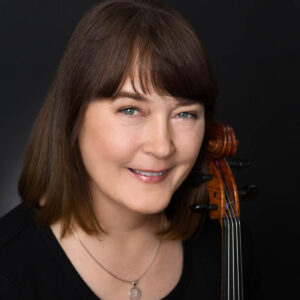 Originally from the Midwest, Cynthia earned her B.M. in viola performance from the University of Michigan and then began a business career, eventually earning an MBA from the Massachusetts Institute of Technology and working in Silicon Valley at companies including HP and Amazon.  She remained an active participant in freelance and community orchestras such as the Bay Area Rainbow Symphony, Symphony Parnassus, and Master Sinfonia Chamber Orchestra. She was also active in chamber music, participating in multiple recitals and attending the Southern California Chamber Music Workshop for five summers where she was coached by the Miro Quartet, the Hausmann Quartet, the Deaedalus Quartet, and members of the Telegraph Quartet.

Cynthia then made the decision to return to music as her full-time career.  She attended the San Francisco Conservatory of Music, earning her M.M. in 2017 with Jodi Levitz and Professional Studies Diploma in 2018 with Dimitri Murrath, as well as studying orchestral excerpts with Yun Jie “Jay” Liu and Jonathan Vinocour.  Other teachers include Scott Ligocki, Marcus Thompson, Nathan Gordon and Walter Trampler.  She’s participated in the Tanglewood, Aspen, and Festival Napa Valley summer festivals and performed in the Schools Proms concerts at Royal Albert Hall.

In addition to leading the Juniors Orchestra at Golden Gate Philharmonic, Cynthia is an Artist in Residence at Ruth Asawa School of the Arts, where she coaches orchestra and chamber music.  In 2021, she designed, launched, and managed the introduction to chamber music program for freshmen and sophomores. She has also taught at Presidio Middle School and Golden State Youth Orchestra.