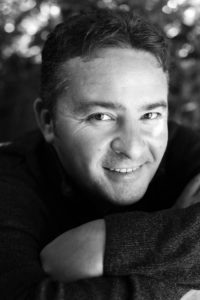 Andrei Gorbatenko is currently in his 19th season as Music Director of the San Francisco Academy Orchestra and enjoys a balanced schedule of conducting, teaching, recording, touring, and performing as a contrabassist in both orchestral and chamber music capacities.

Since moving back to his native city of San Francisco in 2000, he has written numerous education programs for the San Francisco Academy Orchestra including an unprecedented graduate program in orchestral studies. The program, designed to be administered by an orchestra rather than a brick and mortar conservatory, offers emerging professionals mentorship and performance opportunities with members of the San Francisco Symphony.

Gorbatenko’s other recent activities include a North American tour with Mohammad Reza Shajarian, “Iran’s greatest living master of traditional Persian music,” administrative tours of the Midwest and East Coast on behalf of the San Francisco Academy Orchestra, and recordings at the Fantasy Studios and George Lucas Skywalker Ranch where he has recorded as both bassist and conductor.

Gorbatenko spent his formative years taking advantage of the valuable opportunities given to him by the San Francisco Symphony’s education department. There he met former Associate Conductor, Alasdair Neale with whom he began his conducting studies. He has also participated in the programs of The American Orchestral League, The Conductors Institute at Bard, and has performed in the American Academy of Conducting Orchestra at the Aspen Music Festival where he also studied bass with Eugene Levinson, former principal bassist of the New York Philharmonic.

Gorbatenko holds arts degrees from Skyline College and The University of California. He enjoys performing new music but feels that, “whether through architecture, literature, or music, the responsibility of bringing to life the imaginations of the dead are the greatest privilege of all.”